Well, it looks like Canon XXI isn’t going to be changing any time soon.

A little bit of background info for the uninitiated: This July the General Synod of the Anglican Church of Canada is set to meet and the big debate/vote on the docket has to do with changing our Church Canon (i.e. Church law) on marriage.

You can read the Marriage Canon in its entirety here, but for our immediate purposes I think it sufficient simply to say that Canon XXI affirms that marriage is an indissoluble covenant (“until they are separated by death”) between one man and one woman which is ordered towards, “mutual fellowship, support, and comfort, and the procreation (if it may be) and nurture of children, and the creation of a relationship in which sexuality may serve personal fulfilment in a community of faithful love.” One could spend a good deal unpacking this and indeed we have spent a good deal of time doing so.

It’s important to note that the Anglican Church of Canada affirms this understanding of marriage, “according to our Lord’s teaching as found in Holy Scripture and expressed in the Form of Solemnization of Matrimony in the Book of Common Prayer.” That is, the Anglican Church of Canada believes that our present teaching on marriage is not only faithful to what Anglicans have always believed and taught but is the very teaching of our Lord Jesus Christ himself as we have it in Holy Scripture.

Now, not all Anglicans believe this. So, at the General Synod of the ACoC in 2013 a resolution was passed to draft a motion, “to change Canon XXI on marriage to allow the marriage of same-sex couples in the same way as opposite-sex couples…”

A Commission was struck. They met. They prayed. They studied. They produced the report This Holy Estate. Many people rejoiced at the report. Others were disappointed. My own response was one of concern. I thought the theological and biblical reasoning was, shall we say, insufficient. Ephraim Radner, Professor of Historical Theology at Wycliffe College, said, “It was not a theological report. It was a report that used some theology, but for a non-theological purpose.” I think he is right. Moreover, it raised concerns for me with respect to Catholicity. What does it mean to disregard other churches who are asking us not to go forward with such a change? How can we disregard the majority of our Anglican brothers and sisters from around the world? What would it mean for me as a priest to be subject to a church with whom I disagree doctrinally?

Coinciding with all of this in the Canadian church, the Episcopal Church went ahead and voted to changed their marriage canon in the summer of 2015. In response to this and a growing tension in the Anglican Communion the Primates (leaders of the Anglican Communion) met in Canterbury in January. It was an overwhelmingly successful meeting, though not a pain-free one. Indeed, some lamented their communiqué for in it the Primates overwhelmingly agreed on the traditional Church teaching on marriage as outlined in the BCP and Canon XXI of the ACoC.

OK, back to the Canadian vote this summer. I believe the saying is, “ball in your court,” Canadians.

Well, it looks like Canon XXI isn’t going to be changing any time soon.

The Canadian House of Bishops met last week. Many Canadians were praying and fasting for this meeting. Today they released their statement. Here’s the money quote:

In our exploration of these differences it became clear to us that the draft resolution to change the Marriage Canon to accommodate the marriage of same-sex partners is not likely to pass in the Order of Bishops by the canonical requirement of a 2/3rds majority in each Order. Some of us talked of being mortified and devastated by this realisation.

And so we (continue to) pray.

I imagine that the motion will still be debated and voted on but barring any unforeseen circumstances or changes of heart it will not pass. That means that the Anglican Church of Canada will continue to uphold the traditional teaching of Jesus Christ and of the whole Church on marriage.

It’s been interesting to see some of the responses thus far to the Bishops. I think I’ve written enough for now but I’ll try to address one or two of them in another blog post.

“Lord, take my heart and break it:
break it not in the way I would like,
but in the way you know to be best.
And, because it is you who break it,
I will not be afraid, for in your hands all is safe and I am safe.

Lord, take my heart and give to it your joy,
not in the ways I like,
but in the ways you know are best,
that your joy may be fulfilled in me.
So, dear Lord, I am ready to be your priest.” 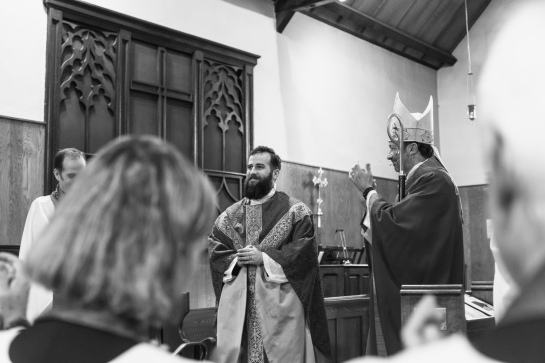 A Sonnet for Transfiguration
by Malcolm Guite

For that one moment, in and out of time,
On that one mountain where all moments meet,
The daily veil that covers the sublime
In darkling glass fell dazzled at his feet.
There were no angels full of eyes and wings,
Just living glory full of truth and grace.
The love that dances at the heart of things
Shone out upon us from a human face.
And to that light the light in us leaped up,
We felt it quicken somewhere deep within,
A sudden blaze of long-extinguished hope
Trembled and tingled through the tender skin.
Nor can this blackened sky, this darkened scar,
Eclipse that glimpse of how things really are.

The martyrdom of St. Ignatius.

"...My birth pangs are at hand. Bear with me, my brothers. Do not hinder me from living: do not wish for my death...Allow me to receive the pure light; when I arrive there I shall be a real man." - S. Ignatius on his way to his martyrdom in Rome.
"Christianity is simply extended training in dying early." - Stanley Hauerwas.
"For those who want to save their life will lose it, and those who lose their life for my sake will find it." - Matthew 16.25

The Archbishop of Canterbury

The Book of Alternative Services

The Book of Common Prayer